I started writing this morning about Fate pointing at me as someone whose life has been altogether uneventful thus far and how she decided she would f*#% with it. But half way through, it was even too much self pity for me to tolerate. Sure I feel like wallowing in it right now, but truth is others have it worse and I am thankful the King wasn't paralyzed in his motorcycle wreck (or worse), and I'm thankful his brain tumor was benign, and I'm thankful we have been able to pay the bills so far, and I'm thankful my girls are better than okay.

So instead I'm going to tell you the baby eaglet was born last night. 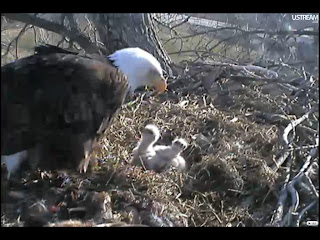 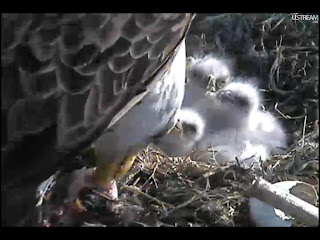 And it turns out I was wrong about the male earlier, they share in the sitting of the eggs, but once the eaglets are hatched, its the female that does most of the tending. The daddy has been doing a good job bringing them fish and rabbit to eat. And I've even seen him share in the feeding of the eaglets. It has been an amazing thing to watch.

susan*
I like to laugh, but even more I like to make the people around me laugh. I like secrets, but I'm only good at keeping the really important ones, so I like sharing secrets even more. I like seeing the good in people, and overlooking their faults. I don't like being the pot that calls the kettle black. I love to read because I love being swept away to another place and time. I like learning new things, I like seeing old things in a new way.

blogs I am faithful to