Hearing a man tell his son "I love you" is a beautiful sound. It ranks right up there with hearing my children laugh. I'm not sure why it is so special. Maybe because I was born at the edge of a generation where men did not use those words with one another. My own dad is uncomfortable using those words with his son. I tell my dad I love him at the end of every phone conversation and I've never noticed a hesitancy in saying it right back to me. I only learned from my brother last year that those same words that are given so freely to me are withheld from him. I was surprised and a little dismayed.

It is one of those things about my husband that I really admire. He has no trouble saying I love you. I hear him say it to his brother and he even says it to his brothers life partner. This is even more amazing to me because my husband is more from my father's generation than my own. He was brought up in a world where being in touch with your feminine side could get your ass kicked. I like to think I've had something to do with his softer side, that raising three daughters with him has shown him a sweeter, gentler side of life. But I don't know, that just seems to be who he is.

Now that he has reconciled with his grown son, I have the priviledge of hearing him tell his son he loves him at the end of every phone conversation. It is a sweet sound indeed. 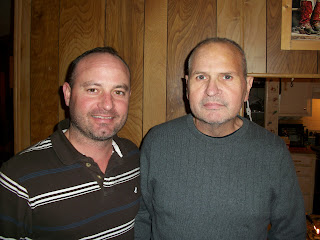 susan*
I like to laugh, but even more I like to make the people around me laugh. I like secrets, but I'm only good at keeping the really important ones, so I like sharing secrets even more. I like seeing the good in people, and overlooking their faults. I don't like being the pot that calls the kettle black. I love to read because I love being swept away to another place and time. I like learning new things, I like seeing old things in a new way.

blogs I am faithful to